For any specific questions that arent covered by the above, please dont hesistate to email us using the contact link above.

Romania has a temperate climate, similar to the northeastern United States, with four distinct seasons.

Spring is pleasant with cool mornings and nights and warm days.

Summer is quite warm, with extended sunny days. The hottest areas in summer are the lowlands in southern and eastern Romania where 100°F is often reached in July and August. Temperatures are always cooler in the mountains.

Autumn is dry and cool, with fields and trees producing colorful foliage, much like New England.

Winters can be cold, especially in the mountains. While not the rule, abundant snowfalls may occur throughout the country, from December to mid-March.

There are significant regional differences of the climate between different regions of Romania.

Temperate graph for Iasi from June/July 2005:

Temperate graph for Bucharest from June/July 2005:

Temperature comparison between London and Iasi: 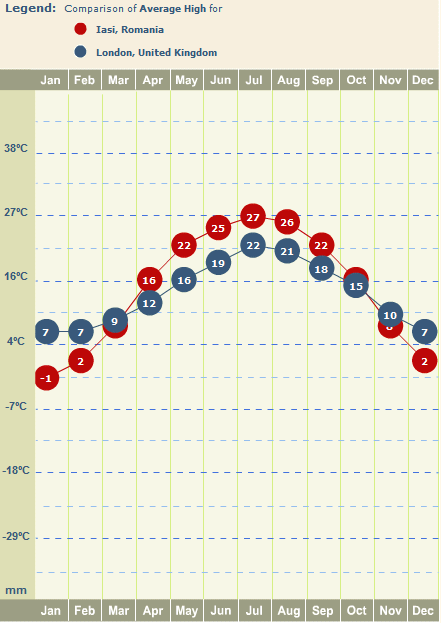