For any specific questions that arent covered by the above, please dont hesistate to email us using the contact link above.

You will be flying into Bucharest - the capital of Romania. However the wedding itself is taking place in Iaşi (pronounced "Yash"). The map below highlights the capital, Bucharest, Iaşi in the north east, and Bran, home of Dracula's castle. 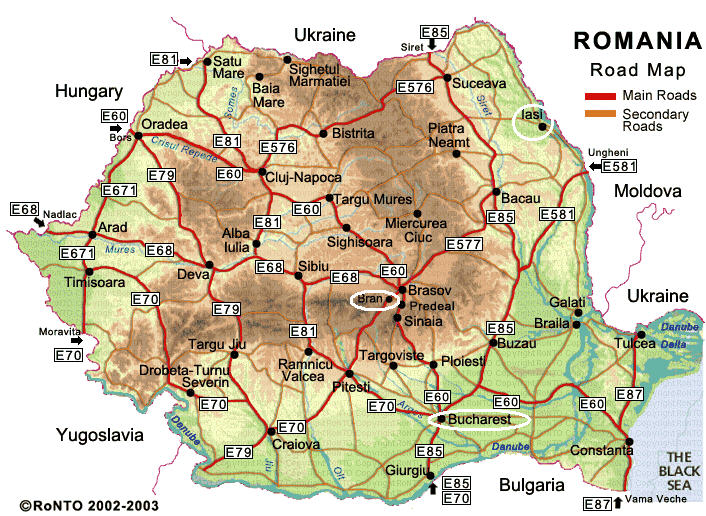 Bucharest - the capital city of Romania - is aligned approximately with the cities of Portland, Oregon; Montreal, Canada; Venice, Italy; and Bordeaux, France.

Romania's territory features splendid mountains, beautiful rolling hills, fertile plains and numerous rivers and lakes. The Carpathian Mountains traverse the center of the country bordered on both sides by foothills and finally the great plains of the outer rim. Forests cover over one quarter of the country and the fauna is one of the richest in Europe including bears, deer, lynx, chamois and wolves. The legendary Danube River ends its eight-country journey through eight European countries at the Black Sea by forming one of the biggest and most interesting wetlands in the world, the Danube Delta.

About a third of the country consists of the Carpathian Mountains (also known as the Transylvanian Alps). Another third is hills and plateaus, rich with orchards and vineyards. The final third is a fertile plain, largely devoted to agriculture. The Danube River runs through the country, from northwest to southeast, culminating in the Danube Delta and the Black Sea.